I’ve been coming to Amma’s French center for several years. Time after time, I’ve received more and more, and at some point I felt time had come to give back in some way. There were several of us in that case. Mathieu, Virginie and Sudha were also looking for a way to bring out Amma’s inspiring message in their lives.

Ayudh’s youth retreats in Germany turned out to be so rich and joyful that we felt we also had to initiate something on our side, in France.

We’re growing in a world that’s craving for help. Cut off from Nature, we’re educated in societies that don’t teach us anymore to relate to what surrounds us, to make a meaning out of our lives. And we all know, from the glimpses we’ve had, how these things enrich and nourish life. 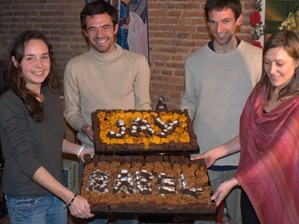 So we tried to figure out a way to make these things accessible to all, and to start a common enquiry with a group of young people from various walks of life. But how to talk about ecology and not make another dogma out of it? How to reflect all this diversity of issues and approaches without getting lost on the way?

The relationship to nature is something to be experienced, so we decided to focus our programs on down-to-earth workshops, where we’d all get to plant trees, mould clay for beehives or pile straw balls. We immediately added artistic workshops, for Nature is by itself an incredible and unlimited piece of Art. When creating, we reach a space in which we’re naturally more receptive to the marvels that are surrounding us.

But we were also willing to understand, and to explain how serious the environmental issues that we approach in these workshops are. So we added a touch of scientific background, to make sure our urge to act would not destroy by ignorance. And then we made a bet.

It worked. The project appealed to the European Commission, who provided us moral and financial support. It appealed to the Ecole Polytechnique Federale de Lausanne, who currently helps us carrying on a scientific experiment on Ramial Chipped Wood, a fertilization technique implemented in the project. It appealed to local journalists, as we got two reports published after the kick-off week-end, and a TV promising to come later. And, most important, it appealed to those of you who embarked on this journey, as they all promised to come back after the launching week-end.

There is indeed much more to come. We’re organizing four more week-ends during Spring, during which we’ll discover the magic of soil fertility, local ecosystems and the ecology of bees.

In July, we’ll build the bee-house, a small house made of straw and wood whose walls will host beehives during a one-week-long youth retreat. This house, with a green roof and hanging gardens on the side, will bring together all the different topics covered in the previous week-ends.

Read more about the BaBel project