5th November 2015, Ranchi We visited one of the premium schools in Ranchi. It was a fun filled session mixed with some interesting discussions about various facets of life. Towards the end we had a short meditation session. Surprisingly there was a pin drop silence in the hall. Some students were in tears after seeing […] On 1st November we started meditation class early at 6:30am at CRPF Kondagaon headquarters, 188 Batallion. The soldiers felt very good. Even though they were doing yoga, the soldiers had been wanting a meditation technique desperately. After learning IAM Technique, they felt the power and efficacy of the technique. Most soldiers we spoke to, said […] We reached the Raipur (Capital of Chhatisgarh) on 29th october. From there to Kondagaon was a few hours of bus ride. Next morning we taught meditation to students of government school of Deurbal village, which is one of the Amma’s adopted villages. The students were very happy and quite naughty. They did not hesitate to […] 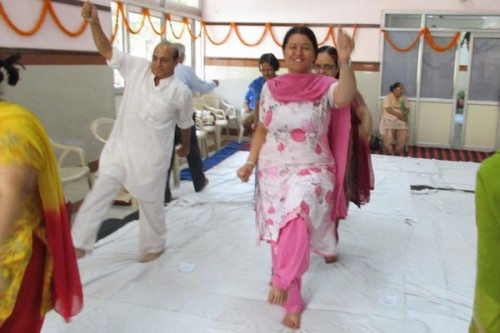 Yet again another IAM training camp in Chandigarh. The morning was little chilly but soon the bright sun came up. After the introductory talk, there was an interesting Question and Answer session. The real fun began after the tea break with Walking meditation. Walking meditation really opened up every one – there were smiles on […] 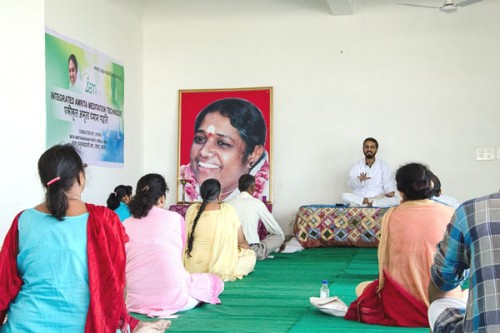 Meditation in the fort of Chandi

18 Oct 2015, Chandigarh The two day, first ever, IAM program was held in Panchkula district of the Union territory of Chandigarh. The name Chandigarh is a blend of “Chandi” and “Garh”. Chandi refers to Goddess Chandi, the warrior form of Goddess Parvati (consort of Shiva) and Garh means fort. The name is derived from […]

13 Feb 2012, Naples, Italy A course of Youth IAM® was held at the school Ipsar Rossini, near Naples. “It was 3pm and students were ready well in advance in the room set for meditation. They all had their mats, pillows and blankets; their faces looked intrigued, but also puzzled by their expectations. In the […]

Today we went with Br. Shantamrita to the United Nations Development Program headquarters in Nairobi for a mini workshop on stress management.  Br. Shantamrita was invited in to conduct a meditation with 50 members of  senior United Nations directors of various UN programs, undergoing a 3-day orientation program for their new assignment in Somalia. In […]

Children have so much to teach

There is much to learn from virtually everything – from the sunrise, from the blue skies, from the air around us, from the birds and insects,…. from everything.  They can teach us so many things – about the nature of the world, about living in harmony, about life and death and so many other things. […]