the youth movement of MAM 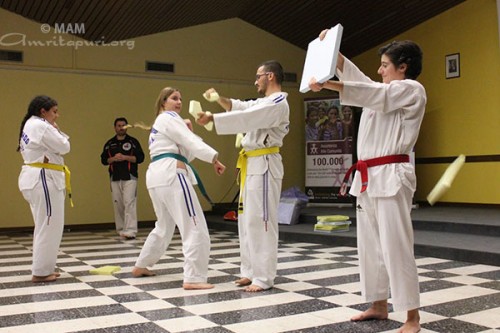 “There is a lot of positivism in Life.” Indeed that is what AYUDH volunteers from Milan showcased in their recent event “Sulle Ali di un sogno” (On the wings of a dream). Having met Amma in the recent Europe tour and also in few previous years, they had been inspired by Amma’s relentless humanitarian activities […]

Volunteering has made me a different person

I started volunteering at Embracing the World’s Children’s Home near Nairobi in 2010 as a reluctant and shy volunteer. My parents would have to practically force me to go to the home. I think this was because I wasn’t quite comfortable with the community around me, as I had never interacted or talked with them. […]

“I Work through Your Hands”

This season Delhi’s winters were extremely cold. But then many people like the winter. Someone told me a few days ago that these are the days when they have special types of sweets to eat and anyway there is more of an appetite in winters. But the winters are pleasant for those who have a […]

Amma says , ‘we are not individual islands but a “shrinkhala”,which means we are a chain linked to one another where we all need help and must strive to help each other”. The devotees of Hyderabad had the opportunity to participate in seva for the poor at Gudimalkapur, Hyderabad. The residents, almost all of them […]

The opportunity to change

It has been two days since I returned home from the 5th AYUDH retreat held at Hof Herrenberg, the German ashram buried in meadows of lush green landscape, enriched with the loving presence of our beloved Amma. It was through one of Amma’s playful leelas that I ended up at the AYUDH retreat, taking on […]

30 April 2009 AYUDH Netherlands decided to raise funds for the Vidyamrita scholarship programme. The Dutch youth felt personally very drawn to this cause. And, being Dutch, what better moment to raise funds and awareness than at the national annual Queensday flea market on April the 30th? On Queensday the Dutch celebrate the birthday of […]

The Project ‘Amma’s Acre’ was blessed by Amma during her visit to the UK, first of its kind and aims to plant 800-1000 native English trees over 3 years. The project took place on the edge of Dartmoor, a National Park in Devon County, South West England. The Amma’s Acre Tree Planting weekend saw youth […]

I’ve been coming to Amma’s French center for several years. Time after time, I’ve received more and more, and at some point I felt time had come to give back in some way. There were several of us in that case. Mathieu, Virginie and Sudha were also looking for a way to bring out Amma’s […]

Two thumbs up from Amma

AYUDH UK at AMMA’S UK Visit 2008 AYUDH UK made their colourful appearance felt this year by a number of activities during Amma’s visit in UK. On the first day of the program, the AYUDH members approached Amma with dove-shaped cookies, which the youth had baked, in an attempt to have them blessed. The cookies […]