Around Amma’s birthday, a tiny pair of birds chose the leaf of a certain potted plant near the kitchen to build their nest, lay four eggs and rear four young ones. They bent a leaf to a shape and made a cradle out of it. 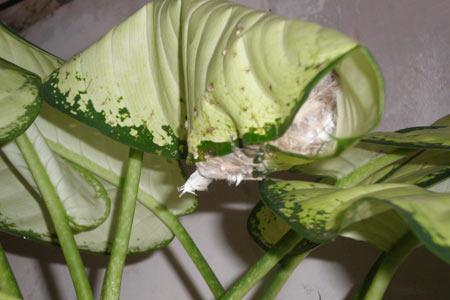 Another kind of tiny birds which built its hanging nest on the mailanji right in front of Kalari, successfully raised a little one which flew into the free air just before Christmas. Normally the wild ants would eat up the fledglings on the day they hatched. This time Nature kept ants away with rains. Also, mailanji was trimmed recently to sever its connection with neighboring trees that housed ant nests in abundance.

The east side of the tall E and A buildings by the Kayal, like mountain valleys, become dark much before the west side which witnesses the glorious sunset on the ocean. Also, that part of the ashram houses different kinds of trees other than coconuts. Thus it has become a favorite spot for many birds every evening.

About a hundred mynas keep shrieking from the peepal tree the whole evening.

In the very neighboring trees sit about a hundred black colored birds: those black water fowls seem to be dumb, or have they chosen to remain so in the face of myna’s din! However, they are known for splashing their droppings all over the coconut frond that until it rains well, from above the tree one will always see the wide white scars on the tree! Too obvious to miss.

Most curious are the – once again – about a hundred white cranes that share the trees and branches and fronds with those black fowls.

The black birds come much before the white ones, when it is still bright. They have a funny shape of a semicolon when looked at from above. To the same branches and twigs and fronds come white birds in groups; they keep coming in till it is about dark. They are quacking like ducks, anything but melodious. They quarrel among themselves – not with the black birds, mind you – for their places, and soon settle down to snooze.

Both the black and white birds withdraw their long necks into their bodies and soon doze off.

The whole night they remain absorbed in that mood of detachment from world (Amma gives the example of bird sitting on a twig in wind, sitting softly ready to fly any time, even sleeping or eating nuts, knowing the twig may break anytime.)

Then, next morning, soon after Archana is over, the white ones begin to wake up. They first stretch their necks, then flap their wings even in sitting position, and the next instant they are in the air. Those black birds seem a little lazy. They don’t stir to quick action so soon. However they too eventually leave for the day. The mynas will have started chirping even when it is still dark. Eventually they too go to fend for themselves.

For one watching this drama from the terrace of the 18th floor of E building, the rising sun, the long stretch of backwaters reflecting the pink of the dawn sky, the vast stretches of green trees, all these draw the beautiful landscape as backdrop to the beautiful big white cranes in flight. 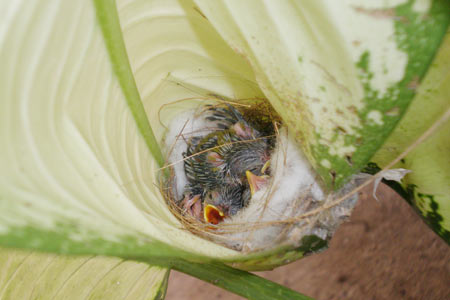 Even as i see this drama every day, i see how metaphorical it is: the birds are black birds and white birds. They share the same trees and branches as well. They are prompt to archana and bhajan. Hasn’t Amma said that even a crow cannot come into Amritapuri without Her sankalpa? Then, these birds must be definitely within the ambit of Her sankapla, come to teach us something. Nature is our teacher, goes the adage.

There are many more birds around here.

Dozens of beautiful royal eagles circle around here just for fun. They have nothing to eat here, if you think they come here in search of food. They float and float over the sea breeze, in a mood which, if put in words, it is ‘expecting-nothing attitude’

There are innumerable friendly pigeons. They fly within short radius and return to the building sides quickly, unlike the eagles which are not at all in a hurry to land.

There are wonderful crows, nightingales, magpies and many other birds, all adding to the orchestra to the morning music.

Even though Amritapuri is a very busy place, birds which are sensitive creatures, choose this for their homes. Why? Because, this is home to Peace and Love. Amma’s embrace welcomes all, especially the humble and feeble ones.