Blossoming from the Quagmire 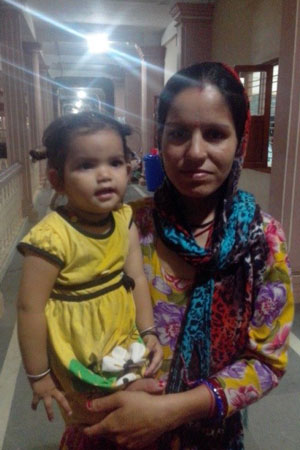 An ill-fated lightening struck in the otherwise peaceful lives of the relatively educated and employed residents of Kedarnath. Huge landslides and floods ravaged everything they had ever possessed. Having experienced such a dreadful nightmare, a question arose in the minds of these hapless victims: “Will life ever be the same again?” However, in the presence of a mother’s care, need a child ever be worried?

To the shocked villagers of Kedarnath came a ray of hope from our beloved Amma. She took up the flood relief campaign, which includes building houses, scholarships to poor children etc – a well-structured relief package to rehabilitate their lives.

Ruchi Tiwari came all the way from Chunni, Uttarakhand, to be part of Amritavarsham61 to express her gratitude towards Amma. The wife of a priest, Ruchi lost her son in the floods. Although this is an irreparable loss, she is happy with Amma’s relief program vis-à-vis the materialistic condition of her life. Left with her two-year old daughter, she says “Bas abhi yehi aasha hai ki meri beti badi hokar Amma ka naam roshan kare”.

Rajkumar Tiwari, another flood victim from Uttarakhand, is present here to thank Amma for providing his family with a house. He admits that, when the relief package was announced, he actually did not believe that this promise would be kept. Of course, he was pleasantly surprised! Now, he takes a direct shot at the politicians: “Although it was the politicians’ duty, there was no response from them. However, I am amazed to see Amma standing by my side. Without Her support, we couldn’t have overcome this dreadful challenge.” From his experience, he says, “During disasters, even a father tends to put his son’s life at stake. But Amma was there holding my hand all the time during the crisis”.

Inder Singh Bisht is one amongst the survivors who saw his near and dear ones washed away in the floods. The aftermath of the disaster was so severe that now he is left with no shelter and is completely dependent on his friend. He approached Amma for rebuilding his house. Although Amma provided the money, he could not build the house as the soil had loosened due to landslides. Inderji told this problem to Amma. She suggested building it on an appropriate land unaffected by landslides. He points out the difference between political leaders and Amma: “We cannot even think of approaching these leaders! The question doesn’t arise. But, with Amma, we can directly approach Her and talk to Her with complete faith”

On the whole, with Amma’s grace, lives of these people in Uttarakhand are blossoming like lotuses and would, hopefully, grow to full bloom of happiness and peace again.