There was great excitement when a program at the MA Center in Germany was listed in the schedule for the Europe tour. This beautiful ashram is a favourite with devotees and it would be the first time Amma would have a program in her own place in Europe. The anticipation was validated by the high level of organization and the good weather that added to the enjoyment of the beautiful outdoor surroundings, with colourful autumn foliage at its peak. Many of the services were offered in plastic tents, so the warmer temperatures were much appreciated. 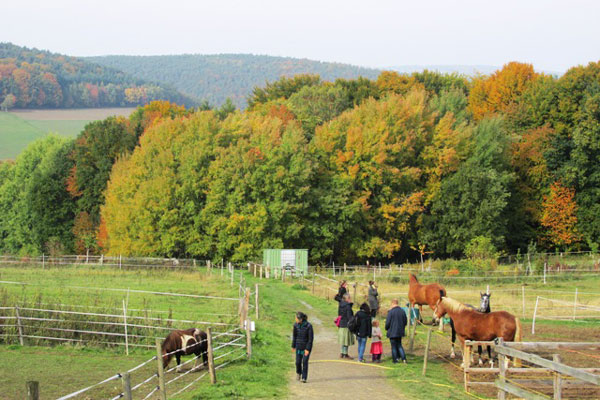 The hall had been converted from a large training facility for horses which had been the former use of this property. However, one would never have known this as it seemed it had always been a program facility. Yellow pine was the main building material, giving it a light and natural look. Large windows and skylights were a welcome relief from the artificial lighting and windowless surroundings of most of the venues on tour, which are usually sports stadiums. Such facilities are the only ones large enough to hold the huge crowds in Europe.

Interestingly, all of Amma’s ashrams in Europe and the USA have or had some connection with horses on the property or as next door neighbours. Here, the horses are still in residence and even some of the staff were accommodated above the horse stable. In previous centuries, this housing of animals on the ground floor and the family above was the typical pattern on European farms. Perhaps this is why there is such a close connection with the natural world here in Europe. The ashram is keen on growing food, recycling, permaculture and harvesting rainwater, which is used for irrigation and toilet flushing. 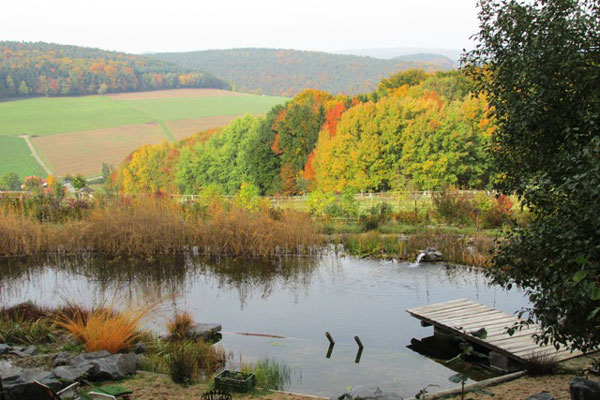 At some point every day on the tour, Amma’s newest version of her early song, Omkara Divya Porule is played. The 45 minute song focuses on love, respect and preservation for nature and the dangers currently facing the planet. It seemed particularly apt to hear it played here at this ashram, where love and protection for nature are so much a part of the place.
The children’s play the last afternoon of the program showcased everything that earth gives us and how we should love, respect and celebrate the earth. In the finale, the sweet, enthusiastic children circled the symbolic globe, waving giant paper flowers and singing, “May there be peace on earth.” It was very moving, particularly as their generation is at great risk and it will be up to them to find the solutions to the myriad challenges faced by Planet Earth and its denizens.

The first night in the new facility, Amma created a joyous celebration at the end of the all day darshan. First she sang the bhajan- Aayaa he saaraa. The whole world has come here. Together, they are here. Let us chant this one mantra in chorus, ‘Let there be peace and harmony in the world. May all the beings in all the worlds be happy!’ Then she sang one of her “dancing songs”-Lille Lalle, which put her, and us, in an increasingly playful and joyous mood. And for the conclusion of the celebration, the irresistible Baduga music came on and Amma stood up and danced and then she made her way out of the hall, stopping in various places and dancing so that everyone could have the experience of seeing her in this mood. This was a special present for everyone there, as sort of inauguration, Amma style, for the new facility!

Navaratri, the 10 day festival of the Goddess, which encompasses ceremonies focusing on knowledge and the arts, plus spiritual and material wealth culminated on the second day of the program. Amma skyped Amritapuri to lead them in the closing ceremonies and the skype connection was kept open for a couple of hours for them to enjoy seeing Amma giving darshan in Germany. She would glance over at them occasionally and smile. So, indeed, the whole world was here! It was yet another auspicious event for the new facility and we felt very blessed to be with Amma during this festival.

That night the mayors of nearby towns were invited to come and meet Amma. It was due to their support that no major obstacles were put in the way of holding a program here. They offered their support to Amma and her ashram and one town gave Amma a replica of its official seal. The mayor of this town mentioned that he was following Amma’s example by initiating a program for refugees in the area. A large meet of European youth is held at the Center every summer and activities for young people take place throughout the year. The townspeople have expressed that they feel this has had a very positive effect on the all the youth of the area. There was a lot of cheering and applause at this show of unity among the local people.
At the end of a glorious Devi Bhava, Amma came out and standing on the stage, and symbolically swept the people standing below into her arms and blew them kiss after kiss. Then in her usual humble way, she said how much she appreciated the hard work done by her “children” to make this first program happen and be so successful. She said it was due to their hard work, done with a unified spirit that had made this possible and that she could only bow down before them. It was a very touching moment and there were many tears as Amma slowly made her way to the camper to start the drive to the next program in the Netherlands.