Anything can happen- at Toulon

Around midnight during Devi Bhava in Toulon, I decided to take a tour of the venue, frankly hoping to find something interesting to write about. As I walked by the token distribution point, I saw a sign saying- Token distribution is finished. But who knows what can happen? What can happen? Only the Lord knows! I stood there pondering this and wondering how with this huge crowd someone without a token could get one.

At that moment a couple arrived and said they had to leave and mistaking me for a token official, they gave me their tokens. I took them, noticing they were for the very end of darshan, ZZZZZZ……I planned to put them in the returned token box at the entrance to the hall. Before I could move, I heard someone behind me say, “Oh no. No more tokens. What are we going to do?” I turned around and said, “Do you want tokens? It’s for the very end which will be tomorrow mid-morning.” “No problem. We want them!” They took the tokens and literally danced away. And so my question was answered and I was even the agent by which someone magically received a token! 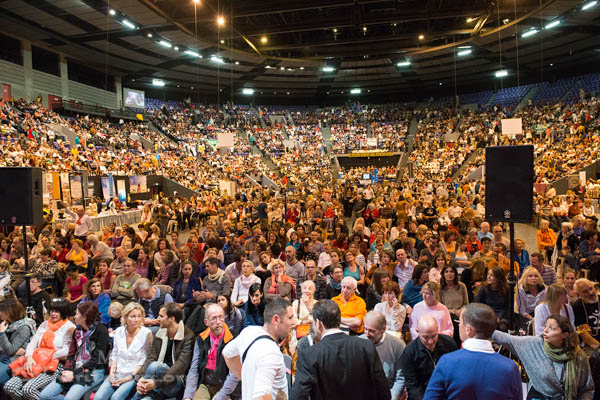 People who came to meet Amma at Toulon

The huge program in this small seaside city is truly a mystery and a marvel. What force impels these thousands of people to make their way here? What force impels the hundreds of sevites to happily work so hard and so cheerfully? Some of them were at the venue for over a week, starting four days before the program to prepare, working the three days of the program and cleaning the venue until late the day Devi Bhava finally ended at 10:30am. How many thousands of dishes did they wash, singing happily and acting like they were at a party the whole time? How many hundreds of kilos of vegetables were cut every day with love and mantra? Amma encourages us to experience the joy of service in every satsang and we can see this advice taken to heart and the effect it has on people. Of course, none of us can serve to the extent that Amma does with her every breath, but we can see that a little effort on our part to help others leads to great joy, for both us and them. And surely it must be the force of love, and joy in service that attracts those thousands.

After Devi Bhava, having packed my lunch and taken my bag to the bus, I still had about 30 minutes before departure. I simply couldn’t resist joining the Toulon team in cleaning the venue and began collecting abandoned dishes, removing flyers from the wall and taking various items of trash to the recycling station. Despite being awake all night, I became so involved in this and so energized that I almost missed the bus. I suddenly thought to look at my watch and realized it was exactly departure time. Dashing out of the building, I jumped on the bus for the 7 hour journey to Milano. I felt a little teary as we waved goodbye to the Toulon devotees, but I knew that ahead of us would be another beautiful experience with open hearted and hard working sevites in Milano. We drove to the south through the terraced mountains, peering down at ancient towns perched on hills above the sparkling blue Mediterranean sea, and then turned inland. We arrived at the venue at Malpensa where the enthusiastic devotees lined up for Amma’s arrival gave us a VIP welcome also.