Since years I have been praying to Amma that I may never forget her presence in my life. Even though I know that she is always with me, the thought of Amma sometimes slips away in the midst of my hectic schedule in Austria.
I have been a big fan of tattoos since long, and one day the thought crossed my mind that if I were to have a tattoo of Amma’s image on my forearm; it would help me to remember that she is always the center of my universe.

The challenge was to find a tattoo artist whom I considered trustworthy and skilled enough to create a realistic image of Amma – after all, I didn’t want to have a portrait that didn’t resemble Amma etched into my skin forever. It had to be Amma the way she is! After having visited almost every single tattoo shop in Vienna, I finally came across an artist who had the genuine talent of creating the quality of image I was looking for. This was about a year ago. Ever since, an image started to expand in successive tattooing on my upper-arm, the central element being Amma’s radiant face, along with several spiritual symbols which were very important and dear to me on my spiritual path. 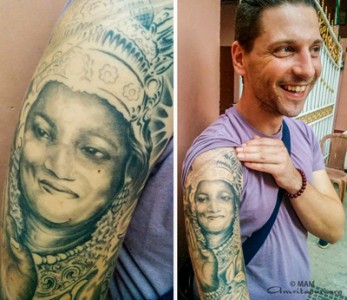 The emerging illustration has had much more of an impact than I ever could have imagined. Firstly, I do remember Amma much more often, since she smiles back at me every single time I look into the mirror or down my upper-arm. But the most interesting impact the tattoo has had is on my interactions with others: There is hardly any day when I am not asked who that lady on my forearm is, which gives me plenty of opportunity to speak about Amma and recall her presence. Amma has become the connecting point between me and others, her image has helped me overcome some of my shyness and apprehension towards people that I meet for the first time. Quite literally, it is Amma’s love that connects me to people, and very often guides conversations into a spiritual direction right from the start.

Naturally, my upper-arm attracts most attention at Amma’s programs in Europe. People don’t hesitate to simply walk up to me, roll up my sleeves to look at Amma’s smiling image for a while. In some instances spontaneous kisses landed on my arm, and some people even bowed down to the image, leaving me feeling awkwardly speechless about their impromptu expression of devotion.

I still meet my tattoo artist every few months to expand the illustration even more – for instance Amma’s palm in a mudra was added last time. In his crazy studio full of images and sketches of dragons, eagles and skulls, Ammas picture, which I originally gave him as a model many months ago, is still hanging there on the wall. With each tattoo session lasting for at least six hours, we have plenty of time to talk about Amma, while her picture is smilingly observing the ongoing work.

During the last European tour I had the chance to show my tattoo to Amma. She laughed hearty and remarked that due to my muscular training her nose has been stretched a little bit too much. While I appreciate Amma’s remark on my physical exercise, I must admit that rather than due to extensive push-ups, it might have been the over consumption of laddhus during the European tour, which has caused the magic transformation of Amma’s face!

So a third benefit of Amma’s tattoo is clearly the motivation to maintain her youthful and radiant expression by moderating my intake of sweets, which in turn is good for my health…

Amma’s tattoo has not only made her presence more visible on my upper-arm, but most importantly, it reminds me that she always resides in my heart, which I am very grateful for.