Two thumbs up from Amma 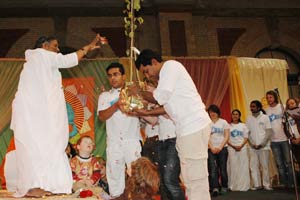 AYUDH UK made their colourful appearance felt this year by a number of activities during Amma’s visit in UK. On the first day of the program, the AYUDH members approached Amma with dove-shaped cookies, which the youth had baked, in an attempt to have them blessed. The cookies were in the shape of AYUDH logo, a Dove, in order to raise donations for her charitable activities. Amma threw flowers on the cookies and youth placing a sweet in each of their mouths.

The second day the AYUDH group all clothed in their white AYUDH t-shirts, congregating by the side of the stage as Amma entered the main hall for the evening programme. After anouncing the celebration of their 1st UK anniversary, the talk covered all the recent UK projects and activities such as the Green Garden charity project, Care for the elderly, Dove Cookie Baking Charity project, Kirtan workshops and their most recent venture: a tree-planting project. At this point the youth carried a pear tree up to Amma for blessing, which would be planted as part of the garden project in an effort to raise an awareness of growing one’s own fruit in their private gardens. This was followed by the presentation of a pot of seeds, which would be used for the proposed tree-planting project. After the presentations were complete, Amma invited all AYUDH members to receive a sweet, which Amma lovingly placed in each member’s mouth, along with an embrace. The speech was brought to a close by quoting Amma’s beautiful words:

May the tree of our life
Be firmly rooted in the soil of love,
Let good deeds bet he leaves on that tree.
May words of kindness form its flowers
And may peace be its fruits. 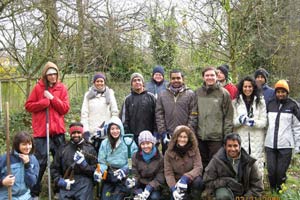 As the youth exited from the stage, Amma gave them an excited smile along with gesturing encouragement and support by holding up her two thumbs up together. Every youth was seen leaving the stage filled with the sense of love and excitement which Amma herself had displayed.