Marco Gabriel Reyes Grieves is currently visiting Amritapuri ashram for a period of 14 weeks with his parents – his father is Mexican and his mother is American. Marco is from Mexico where he lives in a small village right next to one of Mexico’s most famous archeological sites, the ancient city of Teotihuacan with its 2000 year old pyramids, temples and altars. 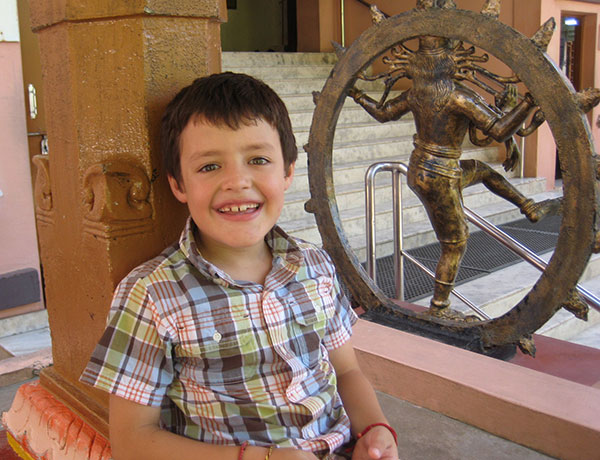 The family decided to visit India after hearing many stories from friends who had visited the country and had had positive life changing experiences. Marco’s father had a longtime wish to stay in an ashram, and when they investigated ashrams in India where children were welcome, Amritapuri was at the top of the list. Marco’s mother had met AMMA and received darshan at the San Ramon, California, ashram about 13 years. Aware of the implications of missing school (3rd grade) for an extended period of time, Marco’s parents asked him how he felt about it and he replied “My spiritual education is more important to me than my regular education.”

Marco just turned 8 years old and celebrated his birthday at the ashram. What he most wanted for his birthday was to plant a tree at the ashram. On October 30th, his birthday, Marco was able to plant a carob tree, supported by family and friends, in a small ceremony in which he decorated the tiny seedling tree with flowers and garlands and made prayers with all his heart for our planet and for light in the lives of all beings. He gave an example to the adults present about a true heartfelt way to celebrate a birthday – giving gratitude for the blessings of our existence!

Marco’s thoughts on some different themes, taken both from his writing and from speaking with him:
Receiving Darshan:
‘Before receiving darshan for the first time from AMMA, I was very excited, because I knew that I was about to receive a hug from a great person with a great heart. When my heart opened, energy flowed through my heart and I felt a change in my consciousness. This was one of the hundreds and hundreds of types of Divine Energy that exist. I am happy with all the darshan I received, but if there is an opportunity to receive it again, I will be very happy also.’

Spirituality:
‘Spirituality for me is the practice of consciousness, the practice of love, the practice of values, and the practice of opening the heart. Examples of spiritual practices can be something as simple as saying “hello,” “please,” and “thank you.” But it also includes meditation, prayers, pujas, darshan, and following good values in your life. These practices take me to Divine Energy. Om Namah Shivaya – it is a path to the Divine Energy, to God. Your Guru is someone who helps you arrive to God. Amma wants to teach us. She wants to help us, like a teacher in a classroom. She is an incarnation of Devi.

Everything is an illusion. Pain is an illusion, we are an illusion. The only thing that is not illusion is our soul. But our souls are not different consciousnesses. Our souls are all part one Consciousness of one Divine Being. We are all part of the same Divine Being. In fact, we are The Divine Being. The one consciousness is the Divine Being.
One could say that AMMA has thousands of bodies in thousands of worlds, and they are all illusion also, but only one body is not illusion; it is real and that body is Her soul. The soul is the only body that knows that everything else is illusion. You think and speak to your own mind, even though the mind is also an illusion, and you can learn to dominate it. You speak to the mind and it will pay attention to you. You learn to control your mind. Those who know how to dominate their minds do so easily, but those who don’t know yet can follow a simple technique of bringing energy from the head to the heart, placing one hand on the forehead, one hand on the heart, then bringing energy from the head down to the heart by placing both hands on the heart. 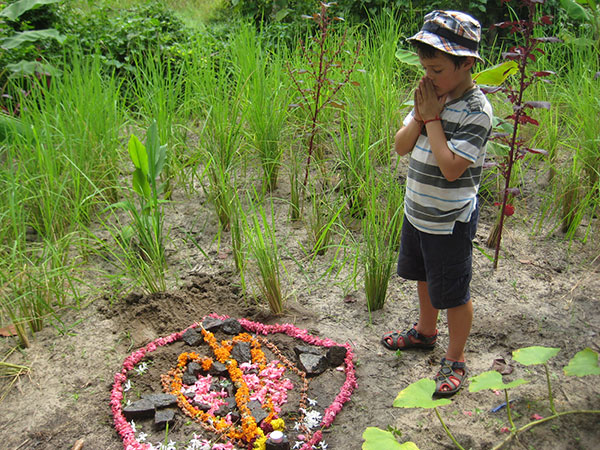 Seva:
I want to help people who are suffering. For me, seva is selfless service in which you feel proud and grateful to yourself, and in which you connect to your Guru in such a way that you feel that you are maintaining Her household. You are doing seva for Her, in service to your Guru. I like to do seva in Matruvani (AMMA’s magazine) because it’s a seva where you can forget about all your pain and all your thoughts. You repeat actions like folding paper. I also like to sweep the patio because it’s relaxing and it feels like you are sweeping AMMA’s house. I like to do seva in the laundry because there are no interruptions and you work in communion with the other sevites. I want to do seva in a garden, so I can also help the Earth. It’s important to help the Earth because the Earth also is part of the Absolute. ‘

Mantra:
‘The mantra for me signifies peace. It is the energy of your deity, the energy of your Guru. When I chant my mantra, I feel full of happiness, joy, and energy. I wanted a mantra to know a bit more about how to control my mind. When I received my mantra, I received the knowledge of how to control my mind. In the moment of receiving my mantra, I felt like one of the incarnations of the Absolute who is an incarnation of Devi was in front of me transmitting energy to me. I felt as if the wisdom of this incarnation of the Absolute went directly into my heart. I use my mantra all the time.’