Although Amma had just finished the huge Toulon program and Devi Bhava had ended late that same morning, as soon as Amma arrived at the Milano venue, she headed for the dining room to serve food to everyone. It seemed Amma would never stop passing plates to the many sevites there preparing for the program, but Amma’s smiling face and the Baduga music made the long wait to finally eat one’s pasta a joyous time. Amma didn’t neglect to give a little satsang along with the food. Before we start eating, Amma always reminds us to think of those who couldn’t be here and to imagine the food going out to them and to all of humankind. This time she expanded on that thought and told us of the importance of not only saying the prayers, but that we should also really understand their meaning and put that meaning into action in our everyday lives. This being Italy, someone gave Amma a heart shaped pizza, delighting all and lightening the mood. At the end of the meal, Amma danced her way out of the dining room, stopping here and there to dance with a devotee. As soon as Amma left, all went back to work to prepare for crowds which would be arriving early in the morning to get a token. 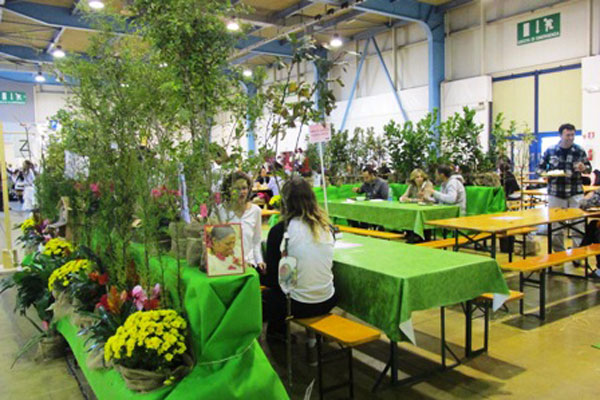 There is no tour stop quite like the one in Italy. The Italian devotees are so enthusiastic and so present about everything around Amma, her every word, gesture, footstep…evokes rhythmic applause and cheers, spontaneously, from the heart. They truly celebrate her existence and presence among them for these days. In fact, the mayor of the town where the program is held announced that this was the spiritual capital for three days and indeed, the deep concentration during Amma’s satsangs, prayers and meditations was impressive.
Equally impressive was the focus on love and respect for the environment. Italian satsang groups are active throughout the year in tree planting, clean up and educational campaigns for environmental conservation. This was well reflected at the venue where the theme was definitely “green”. The exhibit of beautiful artwork illustrating the six points in the Indeed campaign had expanded and stretched the length of the long hallway where everyone lined up in long queues to receive their darshan tokens. Although the days were warm, the mornings were chilly, and enterprising sevites moved among the crowd with welcome hot chai and snacks, which quickly sold out. 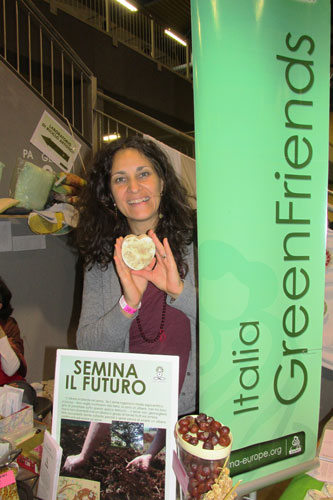 In the Food Court, the Tisaneria was back with herbal teas by the glass or for bulk purchase of the ingredients. A Bio-bar with all organic food choices was available and a new idea was a green space for dining. A small area of tables was enclosed with plants and flowers and people were encouraged to eat there in relaxation and silence and at the end of the program to “adopt” one of the plants. Recycling areas were everywhere with explanatory signs and in the dining hall, sevites were on hand to explain and help you make the right choice. In the hall, the local Greenfriends booth offered information and had many interesting things for sale, including handmade heart shaped soap.
At the end of the first day’s all day and all evening marathon darshan session, Amma still wanted to give the devotees a special treat of singing a bhajan and dancing a little at the end. She sang “Aya He Sara”, one of the joyous bhajans she often sings at the end of darshan or serving food, creating a special festive atmosphere. These lyrics seemed particularly appropriate for the hard working Italian devotees who needed to do mega-seva to serve the huge crowd. “Tread the path of selfless service and karma yoga. Desire everyone’s well-being. Live in such a way that makes this heaven like a heaven. May all the beings in all the worlds be happy!” Amma seemed lost in the “Lokahas”, but came out of her absorption to lead the crowd in a rousing finale and dance her way out of the hall to the Baduga music. It was hard to get to sleep after all that Shakti, but the next day would be a long one surely going into the wee hours of the morning.
The next two days passed all too quickly until it was already Devi Bhava which went on til 10:30am. It was the largest crowd on the tour to stay through the night. There were many ceremonies at the end and the devotees watched attentively and applauded each one enthusiastically. The flower shower went on and on as the devotees passed by in smiles and tears. Meanwhile the tour group was watching the clock as many of us had an 11am departure to London. We were lucky and were able to see the end of Devi Bhava and grab a bit of breakfast, a snack for the road and be on our way, right on schedule.
From sunny Italy we encountered London fog and the spectacular view of the city from Alexandra Palace was obscured. The huge hall looked daunting to set up and it was interesting to see cars and trucks unload in the space that would soon be a darshan queue. But the efficient volunteers soon had all arranged and ready to welcome the large crowd the next morning. As the program unfolded, I paused to reflect on all the loving volunteers that had provided so much support for the devotees and the tour group during this European Yatra. Amma often mentioned the importance of an attitude of gratitude in her satsangs and that we should be aware of the amount of support we are given by so many beings and by nature, in both obvious and subtle forms. For months before the program in each city, volunteers were at work, and then set up and cleaned up the venue after working non-stop to provide services for all who came. Their cheerful attitude and loving service was so inspiring and made it possible for the tour group to serve and the devotees to experience Amma’s darshan. 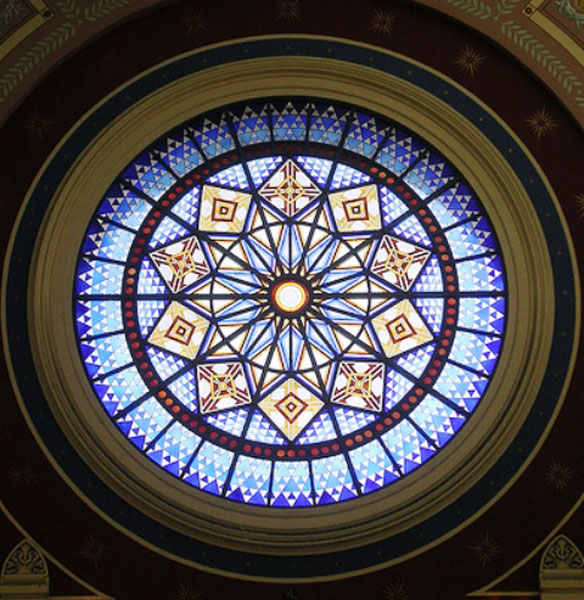 As Devi Bhava ended in London, suddenly the hall was suffused with light. Everyone seemed to be glowing. Looking back toward the end of the hall I saw that the sun had come out and the huge rose window was channeling rays of light to the stage where Amma was standing after the flower shower and on all the devotees around it. Then, just on cue, as the curtains closed, clouds covered the sun and the brilliant light disappeared. Yet, the light lit in the hearts of all the attendees of these programs will surely remain.