Amma started a school there first; it was about ten years ago. Amrita Vidyalayam, Nagara is a beautiful orange pink building with one very long wing, located on the lush Kollur road, about 45 kms from Devi Mookambika.

The village Byse 5kms from school has been beneficiary of several of Amrita Serve activities. Several women have learnt the art of making blocks and building toilets; have learnt several other skills too. 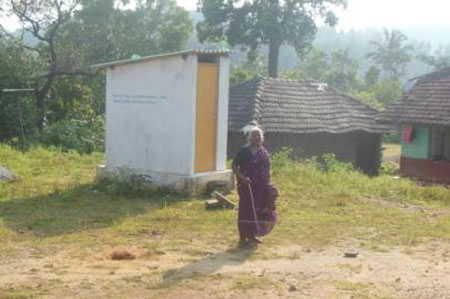 the toilet built by Amrita

Three years ago Amrita sent a team to start Yoga courses for women exclusively. The course included several literary as well as cultural activities. Then many more courses were being introduced. By now ‘Amrita yoga’ has become the in-thing in the Nagara. 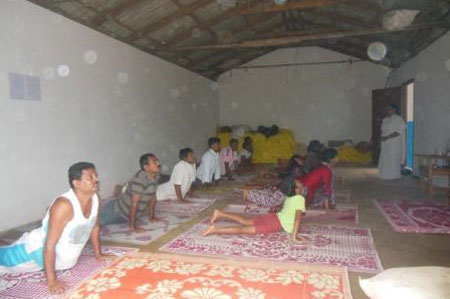 In recent months several yoga camps have taken place from Amrita teams. During this Navaratri, just before the harvest started, people from as far as 12 and 14 kms organised and attended the camps which include yoga, meditation and satsang. Women preferred forenoon sessions (2 to 5 pm); men preferred early morning sessions ( 6 to 8 am). One of the enthusiastic young men whose wife and children never missed a yoga camp said, “It is definitely because of Amrita…. All of us in these parts today have developed sensitivity about our physical health, and have acquired a sensibility that promotes over- all social and spiritual healthy living.”

Many villagers including children also enjoyed watching Amma videos, savouring that special pure joy of singing bhajan. More so with the Kannada bhajans that Amma sings. 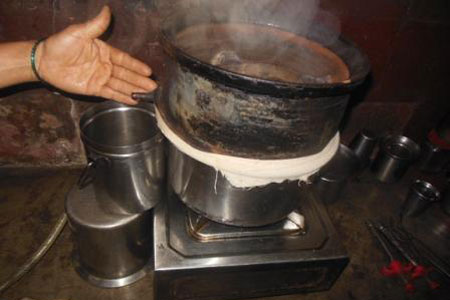 Whenever we visit a village we get to see the native wisdom also. Villagers have lived with their wisdom more healthy lives till lopsided technology spoilt their life system. I met a big farmer here, who is so large hearted as to grow certain fruit trees only for the sake of monkeys from the nearby forests! He says if we give them their due they will let us have our share. He is the only farmer I met who had grown -also successfully reaps- a variety of fruits including mango, banana and anjura.
He also had a gomutra (cow urine) distillery; his wife had piled the few vessels atop the gobar gas stove. She showed how the cows urine, is distilled and collected in a container. The product Arka is well known for its medicinal qualities. 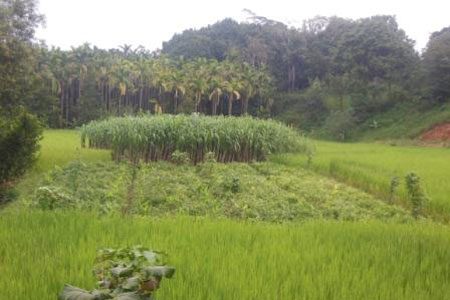 The villagers live a life of hard work on paddy fields and arecanut farms; but their devotion to Mother Earth -which I witnessed celebrated on a festival day, the full-moon after Navaratri- holds a promise. Mother earth never fails them though she cannot give them plenty.