“There is a lot of positivism in Life.” Indeed that is what AYUDH volunteers from Milan showcased in their recent event “Sulle Ali di un sogno” (On the wings of a dream). Having met Amma in the recent Europe tour and also in few previous years, they had been inspired by Amma’s relentless humanitarian activities and having been in the annual European AYUDH week organised in Germany, they wanted to be the first to support white crane project. White Crane was a project conceived by an AYUDH, Mattias who was blinded at 21 towards getting guidance canes for blind children in Kenya who could not afford the same. 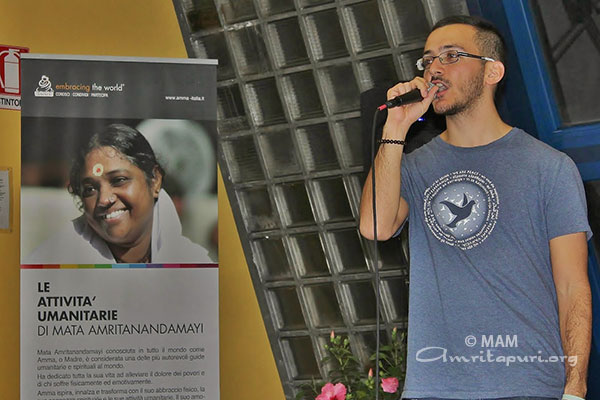 Robert Westmore and Mattia Dassi of AYUDH Italy had been driven to do something in their region to aid this project inspired by their time shared with Mattias. Robert checked with his Taekwondo teacher, Marco and arranged a Taekwondo session. When asked why he wanted to showcase a martial arts event as a fundraiser for white crane, Robert indicated that true goal of martial arts is to learn to control oneself and improve self-confidence, a lesson Amma embodies by her actions of Love.

They both arranged with the local town of Nova Milanese, a few km from the center of Milan for support. When they got the official support, they got a free hall. Robert also got support from the Satsang group for the sound and multimedia support. All this requiring several runs between people, paperwork and practice.

On 13th December, they rushed to the venue (a school in Nova Milanese), purchased a lot of snacks, cakes and drinks, set the tables, arranged the mics, setup some tableau and showcase material, practiced some of their own songs (Mattia had made rap songs in last three years for AYUDH meetings) and as they readied, Sukhrita and others of Milan Satsang helped with the rest of the arrangements. What was truly unique was that they made sure the event was free for entry. 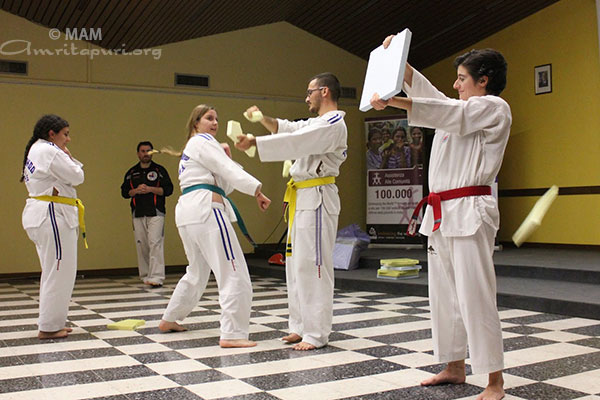 As the hall filled in, the three young AYUDH members who had arranged all, took the stage. With a wonderful introduction on who Amma is and how she inspired so much, they started off with an introduction on white crane project. Taekwondo demo was awesome with flying kicks and breaking boards. Elegance and precision of control was the highlight as the trained students showcased the art. Even public were welcomed to join in for a simple intro at the end. After more than an hour and half of martial art demos, Mattia and Robert went live with their rap songs highlighting the necessity of being positive at all times. Many were touched as they saw their Taekwondo action star going emotionally lively, singing, rapping, laughing and enjoying themselves.

Inspired that it was, the event collected a generous yet small sum, good enough for a few sticks, Kenyan blind children will surely be glad with. The best moments were the laughter and contentment among the organizers, the gracious participants of Taekwondo center and the volunteers after the banquet. In a world where so much negative news flows in, Amma’s inspiration is indeed one of Love.

Like Carl Sagan, the astrophysicist says on Cosmos: “She had studied the universe all her life, but had overlooked its clearest message: For small creatures such as we, the vastness is bearable only through love.”

Indeed, AYUDH Italy event reminded us all of Amma’s words “When love overflows and is expressed through every word & deed, we call it compassion.”