AYUDH Netherlands decided to raise funds for the Vidyamrita scholarship programme. The Dutch youth felt personally very drawn to this cause. And, being Dutch, what better moment to raise funds and awareness than at the national annual Queensday flea market on April the 30th? 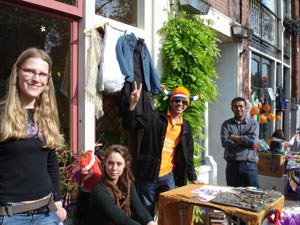 On Queensday the Dutch celebrate the birthday of queen with a flea market, music, games and shows. On this day everyone is allowed to put stalls outside and sell their (old) stuff, offer games to the public, play music or have parties in the streets. The whole city is decorated in orange on that day, the national colour of the Dutch royal family. As most of the Dutch AYUDH members live in Amsterdam and because Amsterdam traditionally attracts the biggest crowd on Queensday, it was decided to have the sale there. 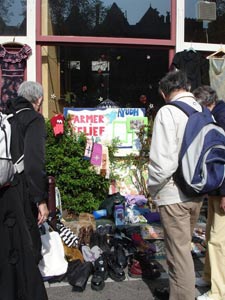 Over the last months the Dutch youth collected a lot of old clothing, shoes, jewelry and other paraphernalia amongst themselves and from friends and family. To attract more people some of the youngsters baked cookies for the sale, as well in the shape of a dove, the AYUDH logo. 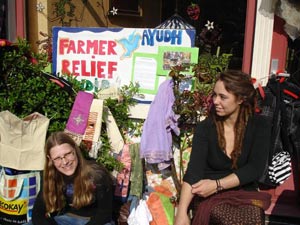 On April 30th the youth got up very early and got all the stuff out into a great spot in one of the most crowded streets. Although the city was already buzzing with Queensday activity, a good spot seemed to have been waiting just for them: a great space just in front of a renowned vegetarian restaurant. A board with information about the project and leaflets were installed, next to all the nice clothes and other things that were for sale. They felt very blessed by the great sunny weather and the goodwill of family and friends, who provided the group with refreshments and even more things to sell. When potential buyers heard the funds were for a good cause, many seemed inspired and reacted very positively. For the youth itself it was the first time they spend the traditional festivities in such a way and it was a great experience. At the end of the day the youth had collected enough donations to sponsor the education of some of the farmers children in India. It was a beautiful, inspiring Queensday. More actions will surely follow! 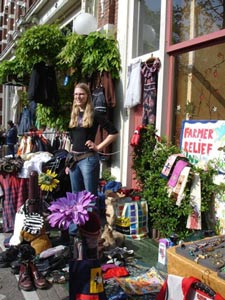