Last night Amma had a big public darshan program in Udupi Karnataka -the place famous for Rukmini’s Krishna and for saints like Kanaka Dasa. Observing Amma is in inspiration in itself. Even though the all knowing mother will never proclaim her divinity some things make it seem so natural and so evident. 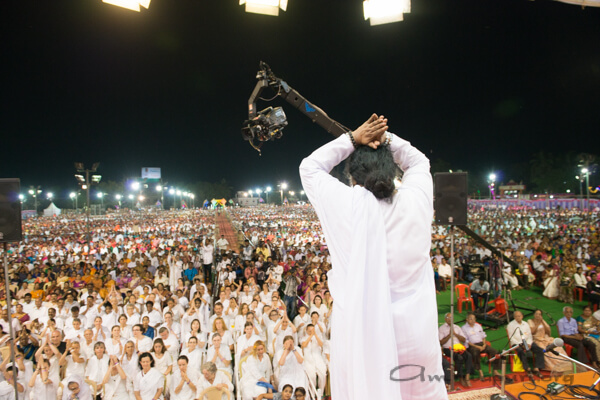 As an impartial observer the scene looks startlingly chaotic. Thousands of people waiting sometimes quietly sometimes anxiously and sometimes raucously – all in the hope of getting a divine hugging darshan from our divine mother – the phenomenon known as Amma. And she sits patiently for hours on end smiling, laughing empathizing with this huge throng of seemingly never ending humanity coming one by one to her to her loving arms.

Having been to many of Amma’s public programs in her India tours it is mind-numbing to see the darshan going on for so many hours and very often difficult to grasp the scale of the compassion our our Guru Amma.

Yesterday I was standing close to Amma. Amma hugs devotees at a great speed. In the middle of this surging humanity she called out a devotee who still had her token clasped inside her handkerchief (impossible for anyone to see), she found time to ask a Prasad giver about his school, she called back two children because they had somehow been skipped in the darshan. All this when everyone around the darshan line is just trying to barely keep up to do their relatively much simpler assignments.

Also it is interesting to see the scores of police personnel that come to Amma at these programs many of whom are providing security at these locations. Amazing to see these people hardened by their interactions with so much negativity in society come to Amma and some of them opening up in her arms like little children. A touch, a glance, a few seconds with the divine – Amma sows the seed of compassion and divine love in everyone that comes to her.

As the Lalita Sahasranama says “Om Sandra Karunaye Namah” – one who is filled with boundless compassion – Amma personifies this so much in daily life as a flowing river of empathy and grace. We are indeed blessed to be born in these times when Amma is on the earth in her physical form. May her grace help us to come closer to her and strive to follow the path she has laid out for all of us.