How Amma inspires – an Amma birthday trail 7560 km away

I am currently visiting Cortona, Milano and Pavia, three places in Italy for research collaborations and official meetings. After one of the meetings, I was invited to attend a “party” near Busto Arsizio. As I was picked up from the station and taken to the place, my host, Sukhrita explained how Amma’s Birthday was important for her. Sukhrita (Manuela Ceresola) is one of those Embracing the World volunteers in Italy among the many who do a lot of selfless service. As a group, they organize musical evenings, free food dinners, fundraisers for education and healthcare activities of Embracing The World. She has been coordinating a Satsang group since January 2005. Here is a story as and how she explained Amma’s Birthday and Amma to me. 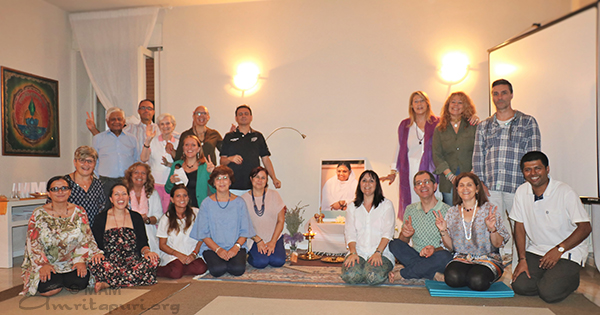 She picked me up at Legnano train station near Milano after I reached from a meeting at the University of Pavia. She was organizing a pot-luck dinner for almost 40 people. “Amma’s Birthday is my biggest party. At Satsang, I usually would love to cook all of it so people can eat their stomach’s full but these days we are bigger in numbers and so if to be sustainable, we all contribute as one family. That way we get many tastes in one evening.” She said Amma’s Tuesday Prasad distributions is more than just an epitome of charity but the very compassion she embodies. Sukhrita indicates, like Indians, Italians had their affinity to big parties, lots of laughter and more importantly, the reminder of something bigger than oneself.

Amma’s Birthday is always special, she says. In Italy, Amma Italia had a National retreat in central Italy where much would happen in addition to Satsang, meditation and bhajans. To some of those who could could not attend the retreat, local Satsang meetings would allow them to cherish and celebrate the inspiration and the message of Amma. Sukhrita and many others had been at the 60th birthday celebrations Amritavarsham in 2013. She recalls listening to Dr. APJ Abdul Kalam at the villages summit and how the then Gujarat Chief Minister Shri Narendra Modi, India’s now Prime Minister had brought in attention to Amma’s relentless service to humanity. When I asked her what did you do after the birthday, she added “Amma had announced the adoption of villages and for promoting sustainable development. We wanted something to line us with that message.” So last year they had gone to the city’s council here and had planted 1000 trees as a token to improve environment in the area Amma visited every year. She also indicated that this year on Oct 1, Bruno Steffen and their musical group from Switzerland would be playing music at an event to promote Amma’s chairities, Embracing The World.

As we reached the Satsang venue, I saw multiple big smiles at the door. The place is called “108” or “cento-otto” in Italian and 30-40 friends had joined. We started with an archana, a message from Amma was read followed by bhajans, Ma-Aum meditation, Arati and Shanti mantras. I was given a beautiful sticker of Amma as were others since it was a gift from Amritapuri. The “family” potluck dinner was wonderful. Amelia had brought around 30 pizza pieces, Montiji – an eighty-year-old Indian-origin gentleman had brought Samosas and bajjis, some had brought two rice dishes, baked pastries, cakes, salad, biscuits, drinks and more. It was a party starting with a “Brahmarpanam”. Everyone was reminded of Amma’s birthday celebrations and soon to happen Europe tour. Many had taken up seva for the days of the Italy program.

I was reminded of Amma’s words: “The beauty and charm of selfless love and service should not die away from the face of this earth. The world should know that a life of dedication is possible, that a life inspired by love and service to humanity is possible.” Amma’s Birthday is indeed the celebration of that service to society, an example set by Amma Herself. Perhaps this is why Amma’s birthday inspires so many across the world.