A song from the ruins

The scenes in all villages are similar… scenes of desolation. Where there were settlements, there are mounds of rubble. Almost nothing is left of the villages here. Almost no houses survive. And even in the towns and cities have not been spared – townships like Bhaktapur and Saku have seen large scale devastation, where vast stretches of blocks have come down. Even cities where you would houses to be have more steel, cement,.. But even here we see so many empty lots with heaps of rubble showing that a building once stood there.

We visited many villages in Sindhupal Chowk and Kavre and Novakot – at some point of time they may have looked different, distinctive. But now they all look the same. 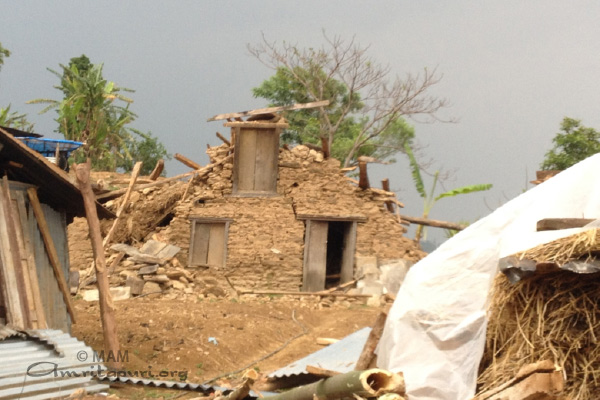 Acharya Tol was one of the settlements we provided roofing to. In a day they should be able to put up these sheets on a temporary basis, at least being protected from the unseasonal intermittent rains. Later they can use these sheets as part of their permanent roofing.

After the quake all of the people in these villages have been staying outdoors, using what parts of their roof they have been able to salvage to make some sort shelter. But though, to the world their plight may seem hopeless and dark, it is not so for these doughty people. Would you imagine someone standing if front of their ruined house and telling us, “Swami, this was my home!” And in the conversation that followed I asked him what he did professionally and Prashant Acharya told me that he was a singer, he used to sing at night clubs. And he burst into a love song, gesturing with his hands, singing in a beautiful voice.

(listen to the music in the video below)