i saw the goddess alive

well known carnatic classical violinists, mysore nagaraj and mysore manjunath, also known as the ‘mysore brothers’ came to meet amma and performed for her near the end of darshan. they were sitting by her side for some time and as darshan ended, amma decided to sing. she sang two songs, they then took out their instruments and started playing along with amma. after two songs amma asked them to play alone. they played the famous song “raghupati raghava raja ram” while amma sat clapping and enjoying the music, especially the sound of the violin. the whole crowd joined amma in clapping along to the music. after the marvelous performance amma once again blessed them. 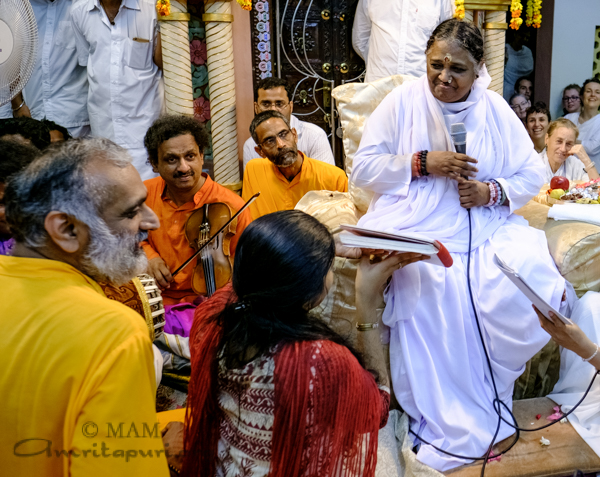 “this is the best and most memorable experience we have had in the last 40 years of career,” said arjun kumar, who was accompanying the mysore brothers on mridangam. he continued, “for me the mridangam has always been my goddess. but today i saw the goddess alive.”

this is the first time that i am watching professional artists who came to meet amma, then perform along with her and sit around her darshan chair and playing for her.

yes, amma is so irresistible.