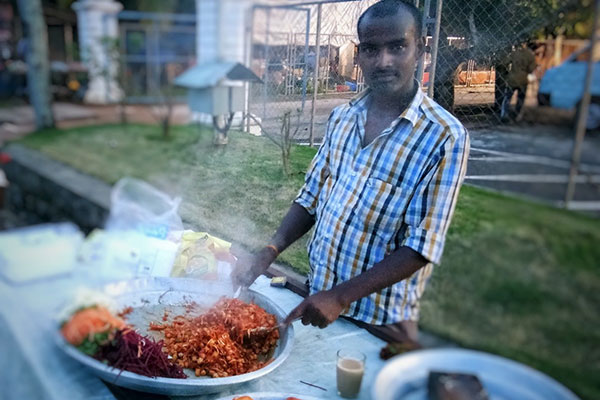 Seven years in a row selling chickpeas at the same spot (in front of the Amrita School of Business parking space) on the occasion of Amritavarsham meet Mr.Nagaraj from Theni, Tamilnadu.

He is a man who had to fight poverty and found it very difficult to have one square meal a day. It was then that he ventured to set up a stall at Amritapuri seven years ago on Amma’s 57th birthday (2010). He says it was a turning point in his life when he fortunately got an opportunity to have Amma’s darshan.
It was a new revelation when he met Amma; he told Amma about all the problems he was facing in life. Amma replied “Son, every aspect of life can be perceived in two different ways: (i) being sad about everything or (ii) being positive about it and taking it as a challenge”.
He says Amma’s words made him think. He chose the second option – that of taking everything as a challenge with a positive mindset.
It was a new beginning in his life, says Nagaraj. This attitudinal change, along with faith in Amma, he says, has helped him expand his business and overcome problems in life. Every year during Amritavarsham he feels the urge to meet Amma and thank her for the change she has brought in his life. Nagaraj concludes by saying “I now have peace of mind, which I got after seeing Amma”