We are not devotees but are Amma’s children 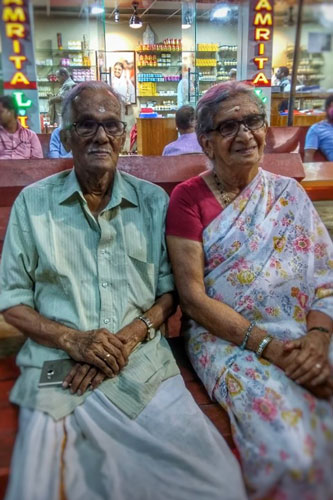 Age is never a barrier when you have strong faith and belief. This couple, Mr. and Mrs. Ramu, hailing from Kozhikode, Kerala, are in their mid-80’s. They recollected that the first time they met Amma was way back in 1986, when Amma came for bhajans at Azhakodi Devi Temple in Kozhikode.
They have been coming here for all of Amma’s Birthday celebrations ever since. They say that, these 21 years, meeting Amma frequently, whenever she is in the ashram, and also every year on the occasion of Amritavarsham, had brought in more peace and calmness in their life.

Mrs. Sarojini Ramu talks about one of her experiences when she came for Amritavarsham50. An auto ran over her leg and she was taken to a nearby hospital but she insisted she shouldn’t be admitted. She says- “I said to the doctors that I came for Amma’s birthday so I want to go for it no matter what”. When she reached one of her relatives’ house in Kochi to stay for that night, they also warned her that her swollen leg will only get worse by the next morning but she replied- “Amma will take care of me as she has always done in the past”. The very next day when she woke up to get ready for the event, her entire leg was healed. A proof of a child’s unwavering faith in her mother?

This year when she came for Amritavarsham64, she got a sprain in her leg. Her husband suggested visiting a doctor and getting it fixed. He felt that, otherwise, she will not be able to walk for the next few days. Again, she refused saying “Why go to a normal doctor when you have the very best doctor sitting on the stage?” She applied some of Amma’s balm and the very next day the leg was healed. Of course, she adds that such things may have happened due to her intense desire not to miss Amma’s birthday; and that this does not mean that doctors and medicines are not needed!