Anju against all odds

‘Being a woman in a man’s world is never easy.’ This refrain is heard time and again. The story of Anju Singh bears testimony to this statement. With Amma’s grace, by taking part in the AmritaSeRVE program, she has been able to overcome all odds and transform not only her own life, but those of others in her village as well. Anju has taken tremendous efforts to coach children who dropped out of school in Alirajpur village, Juna Kathiwada district, Madhya Pradesh. 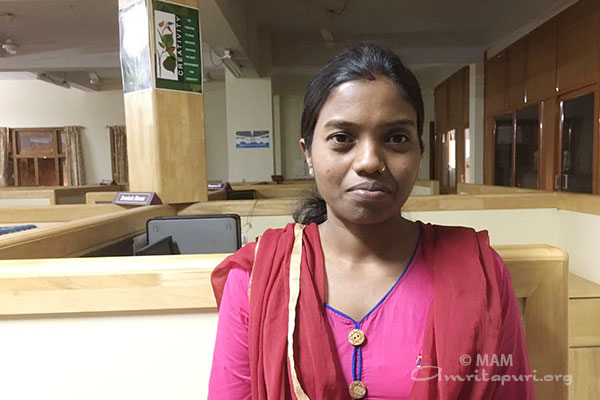 Anju was not a ‘born’ social worker. Hardships – both economic and social – forced her to discontinue her studies at an early age. It was through the support of an NGO that she managed to complete her matriculation. This support proved transformative for her and she spent the next three years working with an NGO in Bhopal towards the welfare of domestic workers. She was sensitized to the appalling conditions they had to put up with, risking both their safety and that of their children all for lowly wages and exploitation at the hands of their employers. Being a woman, she faced constant opposition from her family as well as society throughout this period.

Nevertheless she always wondered if she could work toward the betterment of her village in some way. It was around this time she was introduced to Amma by an acquaintance of hers. This friend told her about AmritaSeRVE and that Alirajpur, a village 800 km from her own, has been adopted by Amma. She journeyed to Amritapuri to attend Amma’s 62nd birthday celebrations and joined the fellowship, working in Alirajpur.

The village is rife with all types of problems – high dropout rates coupled with low incentives to remain in school, poor health, rampant migration to the cities for work and justified scepticism towards any initiative aimed at improving their conditions. Over the course of the last one year, she has continuously worked on all fronts, getting children to attend school, educating the Adivasi inhabitants about the various schemes they can benefit from, conducting meetings periodically while attempting to convince the residents that there is plenty of opportunity to grow locally and not migrate to cities searching for employment.

“As long as I am working, it does not matter where I am working.”, Anju beamed when asked how she feels about working in a village so far away from her own. She has worked hard thus far to ensure better conditions for the children of today. The positive transformation has not only ignited new hopes for a brighter future for her immediate family members but also for the entire village. She affirms that this wouldn’t be possible without Amma’s guidance and inspiration. She finds it very heart-warming to see Amma’s commitment (‘shraddha’ in her own words) towards the upliftment of India’s villages. Anju is delighted to be working with Amma and hopes and prays that the work being done in Alirajpur meets Amma’s expectations.